Somewhere in a meeting room of a collaboration software vendor around the world, I imagine the following brainstorm is currently taking place: “Have you heard about this new Pokemon Go game? It’s making people get up and move in the real world.” “We already provide great tools to […]

Taking a Toshiba Z20T to a Meeting

I met with a client earlier today to discuss running one of my workshops with his team so they could understand the possibilities (and warnings) of Office 365 in advance of unleashing the new tools on the firm. When we sat down in the coffee shop he put […] 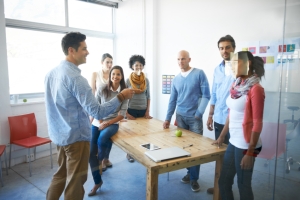 Google vs. Microsoft on Mobile Productivity Apps (US Data Only)

Gregg recently wrote on ComputerWorld about the comparative monthly active user base for Google’s mobile productivity apps versus the Microsoft offerings. The underlying data was provided by SurveyMonkey Intelligence: Microsoft’s core Office apps — Excel and Word — badly trailed their rivals from Google, Sheets and Docs, respectively. […]

From Zasio: Legal mandates differ when it comes to allowing entry into a jurisdiction with an encrypted device, which may render security protocols implemented to safeguard information an unworkable solution. This may result in prohibition of entry, decryption of the device and copying it, or even seizure of […]

Surface Hub: We Are Go

One of the areas we focused on today was Windows Ink, an all-new experience, putting the power of Windows in the tip of your pen. Windows Ink enables you to write on your device as you do on paper, creating sticky notes, drawing on a whiteboard, and easily […]

How Do I Use OneDrive for Business?

At a recent meeting in Christchurch one of the participants grumped about his experiences with moving to Office 365, and in particular OneDrive for Business. He was the owner of a small business, and he had moved all of his files into OneDrive for Business (which if I […]

In December last year Microsoft featured the case study of Booz Allen Hamilton and its use Office 365. There’s a blog post on Office Blogs, a shorter one on The Fire Hose, the above video on Youtube, and a couple of older posts on the OneDrive Blog and […]

Not Every Meeting Room Can Have a Surface Meeting Hub

Microsoft is working to improve the meeting experience for people worldwide, and its Surface Meeting Hub is a good step in that direction. But that’s not going to see widespread adoption for a while yet (due to high pricing), and so there is Project Rigel: Over 97 percent […]