Google vs. Microsoft on Mobile Productivity Apps (US Data Only) 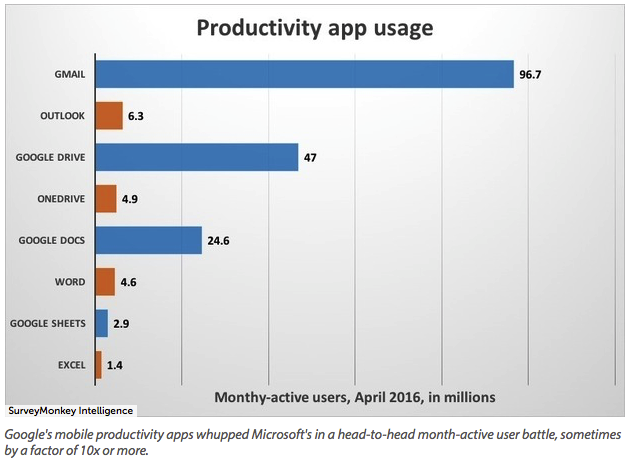 Gregg recently wrote on ComputerWorld about the comparative monthly active user base for Google’s mobile productivity apps versus the Microsoft offerings. The underlying data was provided by SurveyMonkey Intelligence:


Other app categories were just as unbalanced. Gmail, for example, was used by 96.7 million people last month, while Microsoft’s Outlook app — praised by many reviewers — sported just 6.3 million. In online storage, Google Drive bagged nearly 10 times the number of monthly-active users than did Microsoft’s OneDrive: 47 million to 4.9 million.

It is unclear exactly how SurveyMonkey Intelligence derived its figures. The article says (emphasis added):

SurveyMonkey is an online survey firm whose customers use the platform to craft customized surveys. Yu works with SurveyMonkey Intelligence, an arm that mines data from those surveys to provide information to clients on topics like device and software usage, market research and demographics.


Yu had pulled data for Computerworld on U.S. usage of Google’s and Microsoft’s productivity apps on mobile devices, expressed as monthly-active users, or the number who ran each app at least once in April.

I’m confused. The methodology is too unclear to trust the results.