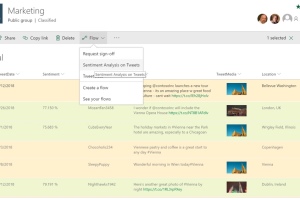 Microsoft used the recent SharePoint Conference to introduce numerous improvements to SharePoint lists scheduled for 2018. About one third of these are available now, with the reminder scheduled to be delivered by the end of December 2018. Here’s the list of coming changes (with one adjustment from the […]

Last year I wrote about Hyperfish a couple of times (Introduction, Beyond Active Directory, and Thoughts on Collecting Expertise). I was interested to note that LiveTiles acquired Hyperfish late last week: Headquartered in New York, LiveTiles is the market leader in intelligent workplace software empowering organizations across the […] 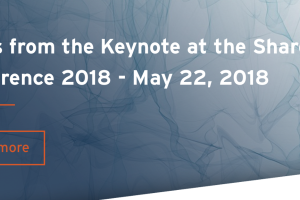 Notes from the Keynote at the SharePoint Conference 2018

During the keynote from the SharePoint Conference 2018 in Las Vegas yesterday, Microsoft made several announcements of new goodness coming to SharePoint. One of those is the ability to create and publish organisational news, rather than just team news: Deem specific sites as “organizational news sources” – as […]

Microsoft published Season 1 of SharePoint Swoop: The Intranet Makeover Show, where three well-known MVPs swoop into an organisation for three days and make some SharePoint and Office 365 magic happen. This is Microsoft’s description: SharePoint Swoop is not a typical reality show — this new, enterprise-focused, five-part […]

On the Silverside blog, I wrote about Microsoft StaffHub: Microsoft has made significant strides in recent years addressing the needs of workers who don’t work on a computer throughout the day. Some people don’t touch a computer at work at all, and yet they still require company news, […]

On the Silverside blog, I wrote about upcoming changes for Microsoft OneNote: One of my friends once covered himself in Post-It Notes and walked into his local Microsoft office. He was hoping to become the product manager for Microsoft OneNote – hence the attention-grabbing way of presenting himself […]

Microsoft Build 2018, a major conference hosted by Microsoft for its developers, was held in Seattle during the past week. CNET cut the multi-hour keynote into a 12-minute highlights reel. – the importance of data privacy to Microsoft (as it should be) – a partnership with DJI so […]

Linking Files and Notes in Yammer with Office 365 (read SharePoint)

Microsoft is making progress in the long awaited alignment between Yammer and Office 365. We don’t yet have the ability to use a SharePoint document library in a Yammer Group, but you can create and save Office documents into the Yammer Files tool. The file types are consistent […]

Microsoft announced the availability of Microsoft Whiteboard, an app for freeform drawing on Windows 10 devices. Microsoft Whiteboard Preview lets you create in whatever way feels most natural to you. The pen-first, touch-first technology lets you make fluid gestures with your fingers or draw out finer details with […]