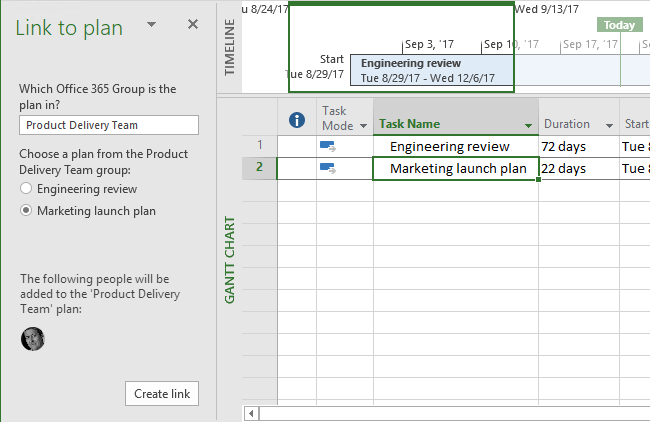 The use of Kanban-style interfaces for individual and team task tracking has become more prominent over the past half decade, with Trello (which was acquired by Atlassian earlier this year) being one of the better options available. Microsoft, while late to the game, has integrated Planner into Office 365. Planner offers many of the basic capabilities required for effective use, although there are several basic and many advanced capabilities still missing in action after a couple of years in market.

One of the ideas floating around is linking the rigour of Microsoft Project with the visualness and user-friendliness of Microsoft Planner. This would allow a project manager to use Microsoft Project to develop the work breakdown structure, do resource allocations, do time sequencing, put in the dependencies, and track completion status on tasks, among others. The project team, on the other hand, could use Microsoft Planner as the vehicle for planning their work, doing task allocations within the team, associating documents and other content to tasks, using checklists to ensure the right task activities are completed, and more. It’s a compelling idea, especially for those organisations using project methodologies to drive operational excellence and execution: both tools playing to their respective strengths enabling all project participants to do great work together.

– Planner does not become the visual interface to the tasks in a current project.
– Tasks in project are not automatically created in a plan in Planner.
– Changes to completion status on tasks in Planner do not flow back to Microsoft Project.

So it terms of linking the two tools productively, don’t look at what Microsoft offers. That may change in the future, but today the integration is non-functional. If you want a functional integration, there are three third-party vendors that you should explore.

SOLVIN Planner Bridge
Solvin, a Germany company, offers the SOLVIN Planner Bridge. The bridge is an add-in for the Microsoft Project Desktop Client that allows a task in Project to be linked to a bucket in Planner. Project can instantiate a new plan if one doesn’t exist, and task completion status in Planner can be synchronised back to Project (this requires the user of Project to click a button).

FluentPro Integration Hub
FluentPro Software Corporation, an American company on the West Coast, offers the FluentPro Integration Hub for linking Microsoft Project Online in Office 365 with Planner in Office 365. This offer is cloud-side (rather than a client-side plug-in), allowing details between the two services to flow automatically and seamlessly. For example, task completion status will flow between Planner and Project. Customers can create rules for mapping fields between Project and Planner, rules for data transformation, and rules for how sync is carried out.

Timlin ProjectSphere
Timlin Enterprises, also an American company but on the East Coast, offers a different approach through Timlin ProjectSphere. It adds a visual Planner-like interface to projects in Project Online, but doesn’t actually use Microsoft Planner. Timlin has created its own visual task management offering that provides the visual representation of a project in Project Online. This allows “task boards and task cards [to be] directly generated from the project manager’s plan/Project Server Online.”

Summary
Three vendors, three different approaches, same basic idea. PMOs and project teams should explore whichever avenue makes most sense in their environment. If linking Project Online and Planner is the key requirement, I’d give FluentPro the lead position at this point.