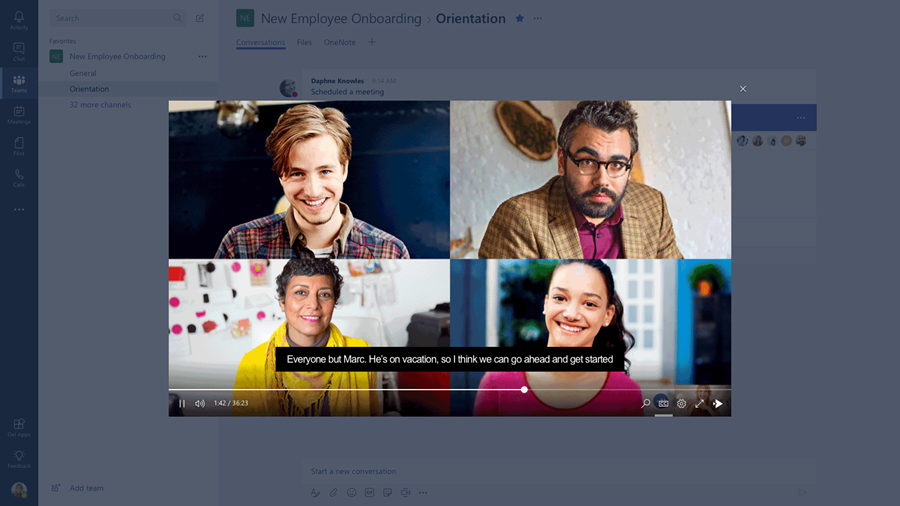 One of the more challenging aspects for organisation’s embracing Office 365 is the overlapping functionality between different tools, leading to “analysis paralysis” (to use Mary Jo Foley’s term). This was actually the reason I wrote my book on Office 365 last year; as I say in the introduction:

I wrote this book because I needed a more structured way of explaining Office 365, my early-to-Office 365 clients were struggling with the strategic trade-offs among the tools, and a much broader set of organisations are going to face these same strategic issues as they embrace Office 365.

Ignite 2017 in Orlando provided several good signals that Microsoft has heard this feedback, and is taking some steps towards a rationalisation of product capabilities. One such signal, for example, is Microsoft’s new vision for intelligent communications, which will see the removal of Skype for Business Online over time and Microsoft Teams becoming the new unified / integrated / intelligent client for teamwork, one-to-one chat, online meetings, inbound and outbound calling, and more. Everything that Skype for Business Online used to offer will eventually be integrated into Microsoft Teams, and it will be based on the Skype infrastructure rather than Office Communications Server and Lync in the cloud. For customers that don’t want to move to Teams yet, Skype for Business Online will stay around, and Microsoft will release a new version of the Skype for Business Server for on-premises customers (as there is no on-premises Teams offering available).

While consultants, business partners, analysts and even authors can outline a way to think about the tools in Office 365 and advise clients on how to choose between them, there is nothing as powerful as Microsoft revealing a bit more of its hand. A consultant saying “use Teams instead of Skype for Business” carries far less weight than Microsoft saying “we’re making Teams the strategic place; see if you can move away from Skype for Business.” Sharing more of the thinking and backstory helps everyone. Clearly Microsoft needs to stay on message now and carry out its intent over the coming years.

I like what I see in terms of the capabilities Microsoft intends to add to Microsoft Teams, such as:

– During the meeting, the conversation can be captured, transcribed, and time-coded, with closed captioning and voice recognition for attributing remarks to specific individuals.

– After the meeting, the cloud recording and transcript can be automatically added to the relevant channel, so conversations, documents, notes, and action items can be reviewed, indexed, and searched by the entire team.

Microsoft took the fairly bold move, in my opinion, of using real-time transcription capabilities during Ignite 2017 presentations, so the words spoken by the presenters were shown using closed captioning within seconds of being stated. That is very cool, and very helpful for multi-cultural, cross-language teams, or anyone suffering through a poor audio connection. And if Microsoft can make it work at scale during real-time presentations, that sends a pretty clear signal that it has the capability to do it for meetings in Teams too.