The Victorinox Shop in Geneva 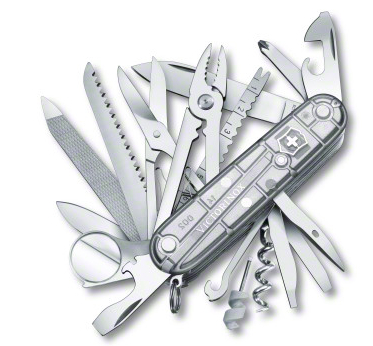 I’m sure there are a few of them in Switzerland, but I’ve visited the Victorinox shop in central Geneva three days in a row now. It’s a three story shop – ground level is men’s clothes (I had a quick look), first floor is women’s clothes (didn’t go up there), and the sub-ground floor is pocket knives and travel gear (and “cool” is insufficient to describe it).

My parents visited Switzerland in 1988, and brought back a Victorinox Swiss Champ for me (as above, but it was in traditional red). It was a prized possession for the rest of my teenage years, and is tucked away in my (checked-in) luggage on most trips even now. But it was starting to look a bit tatty after 23 years, so I had it re-plated today. It used to be red, and now it’s blue.

My sons get a pocket knife of their choice when they turn 11 – subject to a few conditions. Four of them have done so already, and two of them chose the Swiss Champ. Son 5 turns 11 in almost 2 years, but he’s already said he wants a Swiss Champ when his turn comes. It was great fun buying that for him yesterday, and getting it engraved on the in-store Gravograph IS 200 engraver. I wasn’t permitted to video the engraving taking place (which was weird), as my sons would have enjoyed seeing it in action.

A few other comments:
– The shop has an open stair case to all three levels. Running up the height of the three stories is a pocket knife display case. There are 7 pocket knifes on each row, and while I didn’t count them exactly, between 40 and 45 rows in the cabinet. So … a total of 280 or more pocket knifes in the display cabinet.
– There’s a new line of Victorinox bags, and they look very much like the TUMI range. But they’re less expensive (verifiable by looking at the price tags) and more “robust” according to the sales guy (unverifiable without trying both side-by-side). Time will tell … but they did look good.