My New Mobile Office: The iPAQ 212 and Bluetooth Keyboard

At some meetings, it is very appropriate and fine to haul out a laptop and make notes. At others, it’s too much of a visual barrier.

On some days, carrying a full laptop and bag around is right and proper. On other days, you don’t want the hassle.

And in most church services, pulling out a laptop to blog the sermon is severely frowned upon.

For a long time I have been thinking about getting a smaller device for writing and note taking — at meetings, on the plane, or just on days that a laptop is too much. And for the moment, I have found a perfect solution: the HP iPAQ 212 Enterprise Handheld and an HP Bluetooth Keyboard (the image below is not to scale). 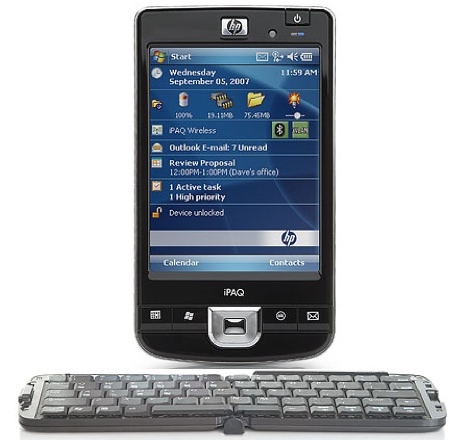 Things That Work Great
The iPAQ has a large screen (for an iPAQ), and it can go from landscape to portrait mode at the touch of a button. I keep it in landscape mode … It’s the best option for the writing that I want to do.

The battery life on the iPAQ is fantastic. The most I have used it for between charges is about 3 hours, but that only dropped the battery meter to 67%, leading me to guess that I could easily get 8 and maybe 10 hours out of it between charges.

The iPAQ range from HP supports external keyboards, and those keyboards fold in half. So I can walk into a meeting with no laptop bag, but with the iPAQ in one pocket of my suit jacket and the folded keyboard in the other. Whip both out, turn the iPAQ on, wait about 10 seconds for Bluetooth to power on, and then open the keyboard and get straight to work.

And to prove that it works great, take a look at these blog posts. Both of these were written on the iPAQ with the external keyboard, rather than a full laptop:
– Novell Roadshow in Christchurch
– Unified Communications — Some Recent Real World Experiences
– this post (apart from some final edits on my Mac)!

Why Not an iPhone?
A valid question for someone who uses a Mac as the mainstay of their computing world is “Why not an iPhone?” For me there are two simple answers that may or may not apply to you:
– (1) there is no external keyboard for the iPhone (yet?), and
– (2) you can’t do Dvorak typing on an iPhone, external keyboard or not.

Dvorak on the iPAQ: Meet InterKey
Talking about Dvorak typing, the availability of translation software to take the input from a QWERTY physical keyboard and render it as Dvorak was the primary reason for going with the iPAQ 212. I searched the Web for such translation software, but could not find it (must have been using the wrong search terms). However, at a recent breakfast meeting with Gavin Knight — a friend from Wellington and an HP employee — I asked him whether he knew. Using Twitter later in the day he found out fairly rapidly that the answer was “Yes”.

The software is called InterKey, and is made by a Russian firm called Paragon Software, but is sold via their brand name of PenReader. They have three editions of InterKey … Standard (for changing the on-device keyboard), Professional (same as standard, with some additional goodies), and Portable (for supporting external keyboards). If you buy the Standard Edition, you get Portable for free; but if you buy the Professional Edition, you don’t. Unfortunately, you can’t buy Portable by itself, and so when my free trial of Portable ran out just before a big meeting, and I was thus rendered unable to take notes, I emailed Paragon and asked what to do. And so they gifted me a copy of Portable. That really impressed me … thanks Paragon!

I should note, too, that Portable does a lot more than merely support Dvorak. It is a general purpose piece of keyboard input translation software for many international languages, such as Albanian, Italian, Latvian, and many more.

As a Dvorak typist, I highly recommend it.

Things That Don’t Work (Yet)
There are some things that don’t work for me yet, but I can live with it at the moment. First, there is no Mac synchronization software for the iPAQ 212. I know of Missing Sync for Windows Mobile from Mark Space, and while that software is exactly what I want, it doesn’t yet support the 212. I wait, and hope, that it will soon. And yes, I have told them that I want 212 support. But nothing yet.

However, given that my primary need is to get access to the documents that I have typed on the iPAQ, I have found a work around that works: SugarSync. I have installed SugarSync on the Windows XP machine that I sync the iPAQ to, and have declared the file folder that the iPAQ document store links to as a SugarSync “full sync” folder, which means that anytime there is a change or update, those documents update to my other computers in my SugarSync network. Such as my Mac. It works fine, and actually covers over Mark Space not supporting the 212 yet.

Secondly, for some bizzare reason, I could not get the iPAQ 212 to work with my Lenovo X60 Tablet running Vista. I tried … multiple times, and the laptop will just not recognize it. It is particularly weird, too, because the Palm Treo 500v that I had for four months worked first time; both that and the iPAQ 212 are Windows Mobile 6 devices. Go figure. I haven’t taken the Lenovo to my reseller to get them to investigate because (a) I have too much writing to do at the moment, (b) the XP laptop gives me what I want, and (c) I am hanging out for Mark Space to add support to Missing Sync so I can use it on the Mac.

What About You?
Do you always carry a laptop for writing on the go, or are you using something smaller?