The Cost of SharePoint = License Fee x9 (It's a Microsoft Figure) 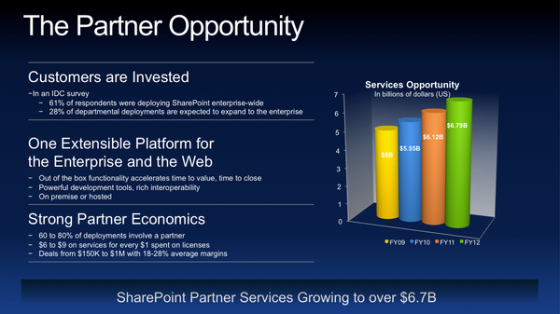 (With thanks to Alex Manchester for getting the actual slide)

In response to my post about making SharePoint not look like SharePoint, Mike asked where the figure I quoted came from. He said:

“I would also like to see you cite your source for the statistic you quoted. The problem with statistics is that anyone can toss them out but unless you fully understand the context they are meaningless. Just because a company does spend extra on SharePoint customizations doesn’t mean that it was needed in order to make the solution work. Many companies find value in small things (such as branding) that others may think was a waste of money. This should not reflect negatively on the tool or be used to scare people away from implementing it.“

My Comments
1. Honestly, I didn’t know it where it came from – I had read it last year, seen it in a couple of reports, but never followed up on it. Here’s what I found.

2. It’s a Microsoft number. A ComputerWorld article about SharePoint from April 2010 has these two paragraphs:

“Microsoft may tout SharePoint’s myriad features, but if you don’t find what you need out of the box, a third-party solution might be your best bet, says Byrne. Microsoft recognizes the value of its partner network: For every dollar customers spend on Microsoft enterprise licensing fees, they spend $8 with consultants and channel vendors customizing Microsoft’s tools or integrating other products.

3. I have seen this “platform plus add-ons” among my clients. Take “SharePoint workflow,” as an example. One client had spent three-and-half-weeks trying to build a (simple) workflow using SharePoint Designer, and could not get it to work properly. I recommended they take a look at K2 or Nintex. The client downloaded Nintex, and had the workflow running within half-a-day. Net result: an extra licensing fee to cover limitations in the base platform.

4. Social networking is another area where firms, even with SharePoint 2010, are looking at add-ons. Microsoft has improved the social networking capabilities in SharePoint 2010 a lot from SharePoint 2007 … but compared to best-of-breed offerings, they are a ways behind. The recommendation in many cases? Buy NewsGator Social Sites. It’s a great product – no doubt about it – but it’s another licensing fee.

5. Even apparently simple things out-of-the-box in SharePoint 2007 or 2010 – the discussion list in a team site for example – are too plain for what Microsoft could have done (more to come on this later), and there are third-party products to buy to fix this. A discussion list being too basic? In 2011? We’ve only been doing this for … 20 years.

6. I don’t have a problem with firms spending more money to make the technology do what they want it to do, as long as they knew in advance that it was likely to happen. I accept that’s not just a Microsoft issue, but Microsoft has a large role to play in appropriately setting expectations about what will work and what won’t work. I do have a problem if firms are told by a Microsoft Business Partner / systems integrator that “she’ll be right mate” out-of-the-box, and then when it doesn’t work, they are told they have to spend a lot more on a third-party add-on. Yeah, I buy the line about gaining greater maturity with the platform over time, and that you should do your due diligence and all that, BUT 9x original cost is far too high, in my opinion.

7. People just starting down the SharePoint 2010 route: you have been warned (by Microsoft).